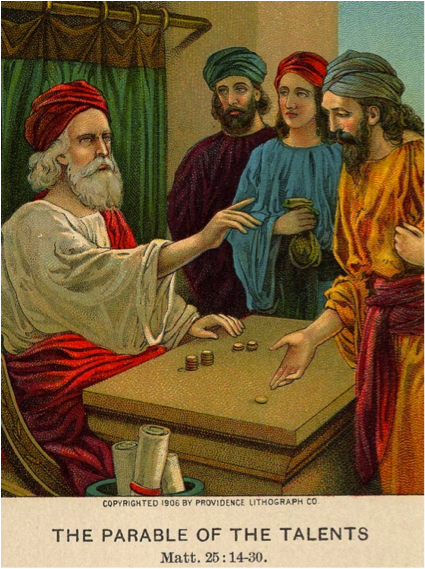 In the storied “Parable of the Talents,”[1] we’re told of a master who leaves his home to travel and entrusts his parts of his property to three servants.  When the master returns home, the first two servants have doubled the value of their entrusted property.  The third servant, however, merely hid his entrusted property in a hole in the ground.  The master admonishes him, saying “For to everyone who has will be given, and he will have abundance, but from him who doesn’t have, even that which he has will be taken away.”

The Parable of the Talents was on my mind as I sat down last Sunday to have Easter dinner with my family.  One of the Parable’s key points is the introduction of multiples from the initial investment. The master is pleased when he receives a 2x return on the property that he entrusts to the first two servants, while the third did not provide even meager returns from the interest gained if he had deposited it with bankers.

Fast-forward to today’s Silicon Valley Venture Capitalists (VCs), like the master in the Parable, VCs also seek to receive multiples on investment (if possible 20-100x or more) to cover losses from other portfolio companies and still provide a healthy return to fund participants (or Limited Partners). Silicon Valley’s advantage as the entrepreneurial center of the world has much to do with its ready availability of VCs. About 1/3 of all VCs in the United States are concentrated in a 30 miles radius centered in Sand Hill road in Menlo Park.

Why has Silicon Valley become such an outstanding environment for VCs?  Believe it or not, the answer has to do with enlightened government intervention.  In 1953, the Eisenhower Administration formed the Small Business Administration (SBA) to promote the formation of small enterprises. Five years later, the Small Business Investment Act enabled the SBA to license private “Small Business Investment Companies” (SBICs) to help finance and manage small entrepreneurial businesses. The Act addressed concerns surrounding a major gap in the capital markets for long-term funding for small businesses. Additionally, it was thought that fostering entrepreneurial companies would spur technological advances to compete with the Soviet Union. Facilitating the flow of capital through the economy to stimulate the U.S. economy remains among the SBIC’s main aims. The Small Business Investment Act provided VCs structured as SBICs access to federal funds that could be leveraged at a ratio of up to 4:1 against privately raised investment funds.[2]

The notion of leverage funds, by which a development agency leverages to privately raised funds by a factor of 2-4x has been adopted by other countries to accelerate the development of the entrepreneurial ecosystem by developing the risk capital[3] industry. Israel had adopted similar policies and more recently Chile established similar incentives. Other governments are following suit. In all cases, these government policies are not too different from the SBA’s motives during the Cold War. Today, the new war is global and the war zone is the market economy. National government’s principal aims in this new war are to outpace and out-innovate other countries.

Unfortunately, Latin America has a long way to go.  Latin American entrepreneurs need funding from smart sources, which can provide in addition to the money access to networks of business contacts, knowledge, and experience.  However, there is a double deficit as Angel and VC funding is very limited, their contacts are inadequate, and their advice is framed in successful paradigms of the past. Certainly, Angels and VCs do not derive any pleasure from losing money. Yes, there is an element of altruism to help the entrepreneur to fulfill his or her dreams. Interests are aligned when these investors, like the master’s servants, produce large multiples.

[1] The Parable of the Talents (Matthew 25:14-30 and Luke 19:12-28)
[2] Adapted from the SBA entry in Wikipedia: http://en.wikipedia.org/wiki/Small_Business_Administration
[3] Angel and Venture Capital (VC) investments. In Spanish this kind of investment is called “Capital Emprendedor.”

Investor, thought leader, university professor, and advisor in areas of corporate innovation, born global entrepreneurship and venture capital investing.
View all posts by Carlos S. Baradello →
This entry was posted in My posts. Bookmark the permalink.